NFI Rocks..... so do our talented employees

NFI Corp Rocks – So Do Our Talented Employees!

Everyone knows that NFI Corp rocks with custom labels. But did you know our employees rock too? It’s true! We invite you to grab a cup of coffee and take a few minutes to meet some of our employees, catch a few funny stories, and hear their amazing music.


When Lourdes sings and plays the guiro, it brings her happiness. Ever hear of the guiro? This percussion instrument is actually made from a hollowed-out gourd! The guiro contributes to the lively rhythm of Latin American music such as salsa. 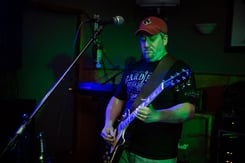 A few funny stories – and a touching one too!

Now you know that NFI Corp rocks with custom labels – and our employees rock too!

Call us for your printed graphic solutions :

We encourage you to bring music into your kids’ lives.